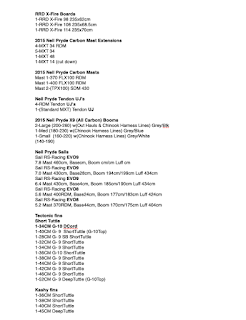 Exocet Speed Slider 67 stolen off Jon Plasters trailer. It is 118 liters, 67 cm wide and 267 cm in length. It is aqua color top and bottom and has a white deck pad. It also has 2 epic back foot straps, missing vent screw and has a tuttle box. If you have any information regarding this board call Jon at 405-821-0021
Posted by Dave Zajicek at 7:17 PM No comments:

Fun times on the river yesterday even though the wind was a lot less than forecasted. The last 45 minutes was the best, sailed fairly flat water in the channel. 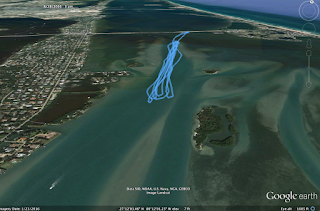 Posted by Dave Zajicek at 6:25 AM No comments:

This afternoon some local storms stirred things up, which was nice because I haven’t been on the water in several weeks. I got to the causeway around 2:30 and it must have been blowing around 18-22mph out of the SE with plenty of sunshine. Ronald Ternullo, Dino, Jerry and I headed out and I was well powered on a 7.0 and a 101 liter board. Their was some pretty heavy chop on the water so we headed south towards the House of Refuge and Jerry stayed just south of the causeway. After 30 minutes or so some low dark fast moving clouds came through and the wind came up more. I was making a run heading west passing between the spoil islands and saw a dark thunder storm with rain to the southwest. I figured it would be awhile before it would hit us so I sailed out to the channel, jibed and headed back east. In that short amount of time the rain had come in. Ron headed into the spoil island and Dino must have headed back to the causeway. I stopped at the spoil island, stinging rain was coming down and the wind was still up. I hauled board and sail up to dry ground as lighting roared overhead. There was a 4 foot wall of sand where the water has eroded the island and above it is a fair amount of pine trees that cover the island. I dropped down in the sand at the base of that wall as the storm raged. Ronald Ternullo joined me, and it seemed like the storm wouldn’t stop. Several more times the lightning flashed and roared overhead and the wind and rain was hitting us head on. I recalled the off hand remark I said to Tammy as I left the house. She questioned me about getting stuck in a storm and I said facing death and living is what this sport is all about. Ron said that it is times like these that you really feel alive and I had to agree.

Meanwhile Jerry had a short sail back to the causeway. He noted that the storm had settled down and covered the river in short order. It was just a wall of rain to the south with lightning flashing. Dino tried to make a run back to the causeway but when the lightning started he was in the shallows just east of the channel so he stopped, brought his sail down and waited it out.

Finally the storm seemed to back down some with the sound of thunder in the distance. Ron and I jumped on our boards and made our way back.
Posted by Dave Zajicek at 8:52 PM No comments:

Saturday I arrived at the causeway around 2pm. Art, Canadian Dave, Tom, Jim and a few others were on the water. Wind was supposed to pick up but was blowing 15 when I arrived. I rigged an 8.5 and decided to shoot some photos and video with my new gopro. Water looked like coffee due to discharges from Lake O. It was pretty choppy and most of the wind was on the west side of the river. To see the video click this LINK.
Posted by Dave Zajicek at 6:05 PM No comments:

Jim Manta shot the following video at the Stuart Causeway.

I was able to sail the Sanibel Causeway this past Sunday. Wind was averaging 25mph out of the NW. It was mostly sunny at 55 degrees with a wind chill of 48. Their was a good turnout of windsurfers and kite boarders. I was well powered on a 4.7 on 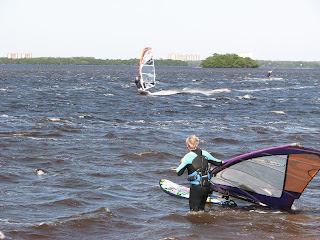 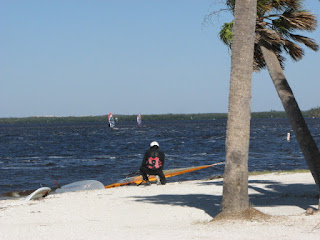 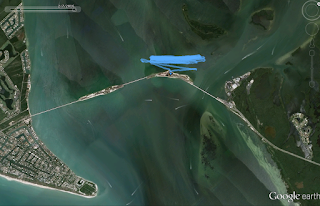